A Journey with a Special OTTTB

Looking a picture of confidence, but the transition from the racetrack to the competition arena is usually a long journey.  Here’s how Yvette did it, ultimately with the help of a VF Natural Diet and Herbal Treatment Program.

She bought Cuzi sight unseen (usually not a good idea!)  from the breeder after a 6 month spell preceded by a career of 9 starts with minimal success.

He was transported from Sydney to Kinglake West in Vic in August 2019 and even though he ate and drank well on the three day trip he arrived light on in condition which was to be expected.

Cuzi was given time to settle into his new home, and of course had all the usual attention – teeth, worming and feet – so lucky that Yvette’s husband Shaun is a farrier and a horseman!

Initially Cuzi was very snitchy around the girth so he was treated by a massage therapist who found a muscle injury on the near side girth area.  This was fortunate as it would have been easy to jump to the wrong conclusion of gut ulcers.

Yvette says he isn’t a typical Thoroughbred.  “We took him to the beach and on road rides as well as arena work and his training program was not rushed.  He has always been a great eater and drinker so he put on weight, enjoyed the attention and the work and started not to stress with float trips and was generally trainable.” 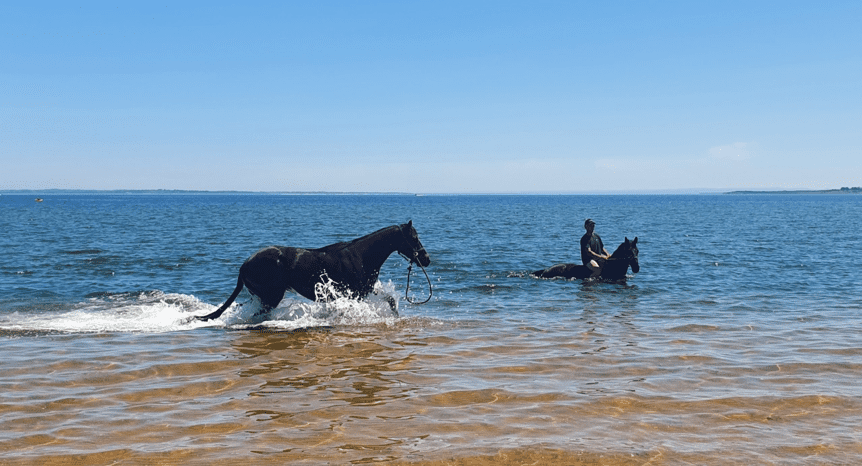 After time off during the holidays,  Cuzi had dropped weight,  was ravenous and wasn’t happy in himself.  Vet checks and bloods revealed nothing but faecal samples showed a high worm count.  He was then put on a course of Panacur, preddy granules and Blud, and he started to pick up but after only four days light work he dropped off again.

I was at this time that Yvette contacted me for help.

My view was that he more than likely had a resistant worm burden, so he was tested by my colleague Kim Dawson who offers my clients inexpensive tests. He had a count of 700 for strongyles, which dropped back to zero after treatment with Strategy T, and was still zero at the next count.  He then started on monthly treatments with my Paranormal Formula and so far has maintained a zero count on testing.

I changed Cuzi’s commercial diet to his own customized VF Natural Diet featuring boiled barley and linseeds, oats and Equi-Vital and he had a full blood cycle of herbal prescriptions targeting his immune system, liver, kidney and gut.  This has done the trick and allowed Yvette to continue his training.

Yvette explains “Initially we were third on the waitlist and we had been away down the beach for two weeks with the horses and the cat. We arrived home late on the Sat 23rd Jan and received a call at 5pm saying there was a late scratching. Oh and we were scheduled to ride at 0845hrs ! I asked Shaun what he thought and he said ‘let’s go’.

Cuzi took everything in his stride and was a real gentleman even though he got anxious in the warm up, he achieved a 10th place in the first test and for his second test he was tired so I didn’t put any pressure on him. We even got interviewed by Racing Victoria! “

Two weeks later their training proved successful when they achieved 4th & 8th places (with one score of 73.4%) moving up to 7th place on the series leaderboard.   Their next start is mid-March and Cuzi will start jumping in April as he is maintaining his weight, is happy in himself and fantastic to take out.

Yvette purchased her first OTT gelding when she was 26 and fell in love with eventing. She likes to buy green inexpensive horses and patiently work with them and has competed with success up to Medium Level Dressage and 2.5* Eventing.

I will be closely following Zealand and Yvette. The moral of this story is that equine health challenges are not always what they appear to be.