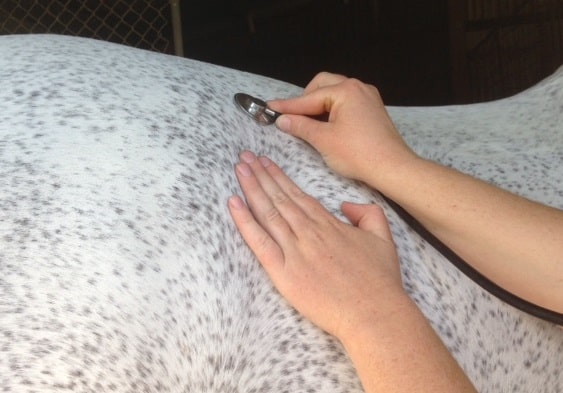 Colic can be a life threatening condition and it is therefore imperative that all horse owners and carers should have a good knowledge of how to recognise, treat and prevent this relatively common complaint.

What is colic?  A horse is said to have colic if it is suffering from abdominal pain. The causes of colic are myriad and can be caused from conditions affecting the various organs but it is often caused from problems in the digestive system.  Very often the cause of a colic cannot be determined, and may prove to be a one off mild case easily resolved.

There are various types of colic – spasmodic, impaction, gaseous and twisted gut.

Spasmodic colic is the most common and the easiest to resolve quickly. Symptoms include mild distress, sweating, looking at the flanks, pawing and wanting to roll.  Horses with spasmodic colic usually pass fewer droppings and may or may not have normal gut sounds.  Anti-spasmodic herbs or drugs usually resolve this problem quite rapidly.  Or a horse may have a colic of this kind which resolves itself because it has not been noticed.  A green pick is often appealing to a horse with mild spasmodic colic.

Impaction colic is more serious as it is caused by impaction of food material in the large intestine. Signs are similar to spasmodic colic but usually with an absence of gut sounds and little to no manure being passed. It is a good idea to learn how to listen for the sound of discharge at the ileo-cecal valve.

Also learn to monitor heart rate and temperature as these may be elevated with colic. See photos below. 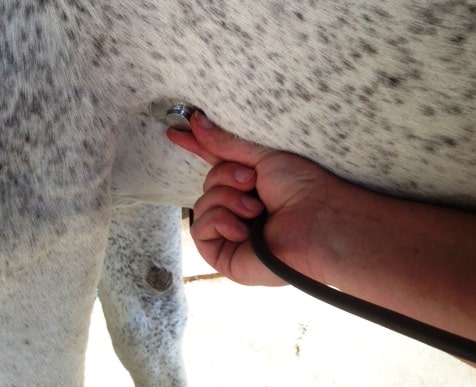 Valerian is a strong anti-spasmodic and is very useful for relieving symptoms of impaction colic and returning gut motility. Valerian is also included in my Release Formula. Very handy if you are not sure which type of colic the horse has.

Gaseous colic may be extremely painful with symptoms being violent rolling and copious sweating. Distension of the abdomen is a common symptom. Gut sounds are usually loud and over active.

Peppermint is the go to herb here and it is also included in my Release Formula, as all three herbs act together to relieve symptoms.   Dosage is 5 – 10 ml depending on the size of the horse and can be repeated at 10-15 minute intervals, while the horse is being led to prevent rolling.

OTHER CAUSES OF COLIC

Mares can experience uterine cramping and this can cause colic, Valerian is effective here too.  I learnt this from a mare of mine many years ago.

One of the most common known causes of colic is high worm burdens and damage to the gut caused by worm burdens.  Neglect of dental health is also a problem.  If a horse cannot chew its feed properly, which is the first stage of digestion, then obviously problems will result.  Any horse which has been neglected and starved either in utero or at any stage in its development is a candidate for colic episodes, even many years later.

Other causes include sudden changes in feeding, contaminated feed, travel sickness and toxicity.

Accumulation of sand in the gut can also cause colic known as sand colic.

Oil drenching is often required to help relieve sand colic and impaction colic.  Vets use paraffin oil as it is not absorbed by the gut but I have found a mixture of cold pressed linseed (aka flaxseed) oil 2/3 with 1/3 water is a more effective and gentle alternative, as the paraffin disrupts gut flora and can cause scouring.  Oil drenching must be carried out with care so unless you have a competent equine veterinarian to do this I recommend syringing cold pressed linseed/flaxseed oil over the tongue, dosage 50 ml x 3 daily for an average sized horse (450 kg) go higher or lower as the case requires.

Colic which does not resolve quickly using these herbal remedies or veterinary drugs, and/or is recurrent, means there is a serious underlying cause such as liver disease or enteroliths.  The quick action of veterinary administered pain killing drugs are needed in these cases, but herbal anti-spasmodics will also help.  I am not in favour of bute being given for colic, as it is not anti-spasmodic.

Colic can also be caused by kidney dysfunction especially from dehydration and will also require saline drenching.

Establish a regular worming program with seasonal faecal counts and using rotational wormers combined with herbs which have anthelmintic qualities such as Wormwood and Garlic.

Have all horses’ teeth checked by an accredited horse dentist at least once a year, twice a year for riding horses.   Avoid dentists who use power tools.

Horses coming off hard feeding and being turned out onto lush pasture,  should be introduced to grass initially for short periods, gradually increasing the length of the periods.

Do not feed bread to horses under any circumstances. Bread these days is highly processed and with very little nutrition value and is therefore difficult for the horse to digest. In large quantities and especially if very little else is being fed, it inevitably will cause colic. In fact bread these days even causes problems in human nutrition!  If you only give a piece of bread as a treat, change over to carrots and apples, but not in excess.