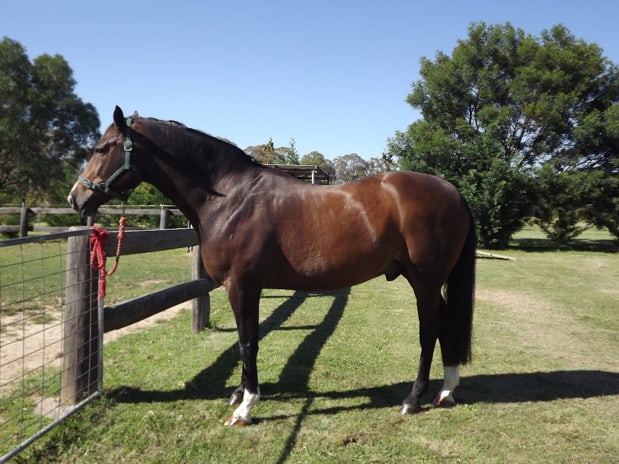 Increasingly horses and ponies are being diagnosed with Cushings Disease or Equine Metabolic Syndrome. They are different disorders. Pictured is my Holsteiner gelding Fabio, showing the cresty neck and fat lumps each side of the tail, consistent with EMS, but blood tests showed that he did not have EMS, and he never had laminitis in his 17 years of life with me until he went to that big pasture in the sky. More on him later in this article.

Cushings Disease
According to Kentucky Equine, Cushings is caused by an enlargement in the pars intermedia of the pituitary gland. This condition leads to oversecretion of cortisol by the adrenal gland. Affected horses may show signs such as increased thirst and urination, loss of muscle mass, an increased susceptibility to infection, and a long hair coat that doesn’t shed normally.   Laminitis is a common symptom as are hoof abscesses but that is usually in the later stages.

Equine Metabolic Syndrome
According to Kentucky Equine, most horses affected with equine metabolic syndrome (EMS) are overweight and have abnormal fat deposits that include a cresty neck, fat around the tailhead that makes the tail look inset into the body, and fat pads around the shoulder, sheath, or udder. Horses with EMS gain or maintain weight with little feed. I add to that they invariably have exceptionally greedy appetites and have a chew rate about double that of a horse with a normal appetite. Laminitis is a common symptom especially associated with lush pasture growth in late spring and early summer.

DIAGNOSIS
Kentucky Equine says first rule out Cushings using the ACTH test, then test insulin and glucose levels.   ACTH stands for Adrenocorticotropic Hormone which is elevated in horses with Cushings.

They state that the ACTH test is not accurate for every horse so must assess physical symptoms as well. Seems like a no brainer to me – in the old days vets always used their eyes, hands and brains and often did not resort to tests. These days it seems to be round the other way.

Insulin – this hormone is elevated in cases of EMS.

Fabio’s glucose serum was very low, insulin within normal range, triglycerides also normal, so technically he didn’t have EMS, but actually he did. ACTH levels were not tested as he had no symptoms of Cushings.

HERBAL TREATMENT FOR EMS & CUSHINGS
I treated Fabio with a prescription of liquid herbal extracts to re-balance his endocrine system, also bitter liver herbs to help reduce his abberant appetite.

This is how I treat all EMS horses together with a customised VF Natural Diet without any structural carbohydrates. This works extremely well to reduce fat deposits and balance appetite, which reduces the risk of laminitis.

These days horses are often diagnosed with Cushings on the basis of a single blood test – either insulin or glucose levels, often without any consideration of the physical characteristics of the horse concerned, when the first test should be ACTH.

This test is often offered free – a marketing hook to immediately put the horse on the common vet drug for this condition, which has a very narrow sphere of influence – only stimuating dopamine production.

I have been successfully treating horses and ponies with Cushings disease for many years. The function of the pituitary gland is specifically targeted with adaptogenic herbs and most importantly the specific symptoms being experienced by the individual, are treated with appropriate herbs.

Recently one of my clients started herbal treatment with their gelding who had sudden onset Cushings and who was diagnosed by the vet and placed on the drug. Unfortunately he had a bad reaction to it, becoming very lethargic, losing muscle mass and lame in one leg. After 10 days on the herbal treatment, he had regained his appetite and energy and wasn’t lame. Even I got pretty excited about that response, but it is a condition which does require ongoing treatment, as it can only be managed and not cured.

Holistic herbal treatments customised to each horse’s individual requirements may be an old fashioned idea, but it works.