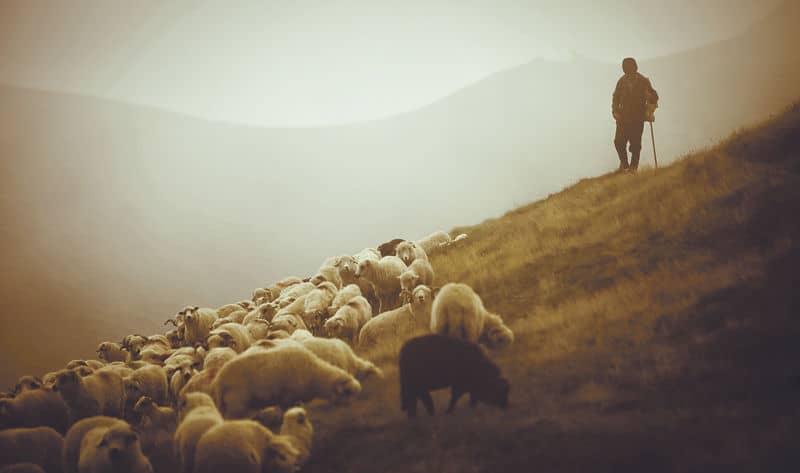 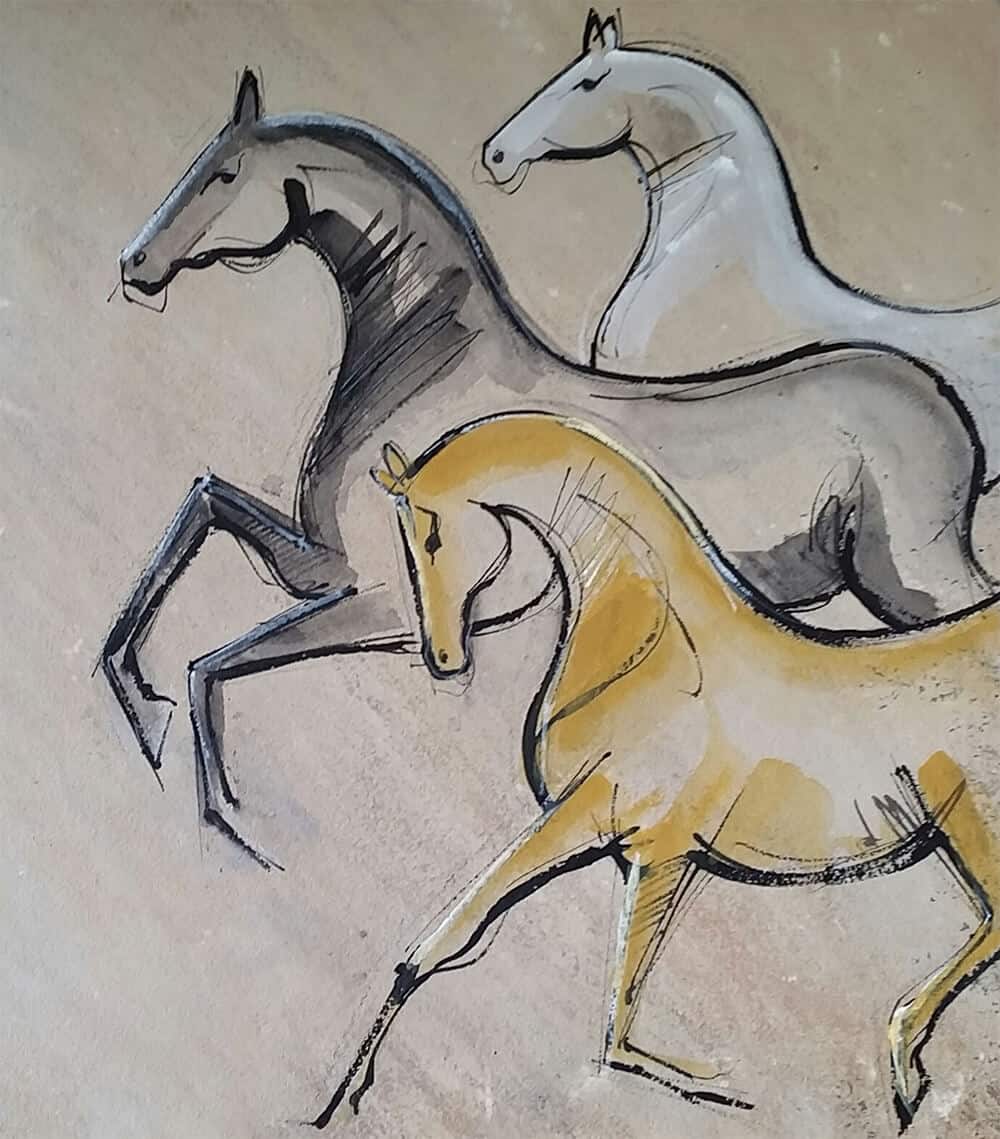 It all began with animals

In the last two decades the ancient wisdom of herbal medicine has undergone a huge renaissance. It is now firmly entrenched as a healing modality for humans and animals. It will continue to grow in popularity in the future as more people seek safe, sustainable and cost effective ways of keeping themselves and their animals healthy.

Despite the alternative label given to herbalists in this century, the medicine they practise has continued without a break for over twenty five centuries and more properly should be known as traditional medicine.

The cast of characters, some famous, many unknown, in this universal cultural history is awe inspiring.

But it all began with animals.

Imagine a scene some 10,000 years ago – a lonely shepherd tends his flock.  He starts to notice how some of his animals eat certain plants at particular times and very gradually a pattern forms in his mind.  It dawns on him that his animals select plants to medicate themselves!   Their instincts lead them to eat certain plants for medicine. This enlightenment becomes the idea that as those herbs heal his animals then they ought to be able to heal humans as well.

So traditional medicine began with animals teaching man that plants could be used for medicine as well as for food.

In cultures all over the world, certain tribe members specialised in the practice of using herbs for medicine and became known as healers. By trial and error these pioneers found out which plants had beneficial properties and those which were poisonous.  In this quest for knowledge people lost their lives or became ill to find out which plants not to use. These practices were entangled with ritual and magic, some of which exist today in many tribal cultures.

This knowledge was passed down through families in all cultures, originally by word of mouth, later by hieroglyphics inscribed on stone and eventually by the written word on medical papyri.

Herbals detailing the medicinal properties and uses of herbs became established.  Famous herbalists of their day contributed to these collections, and some authored their own herbals.

The Egyptian’s knowledge of herbal healing was taken to Greece where classical herbal medicine developed in the 3rd and 4th centuries BC, particularly through the influence of Hippocrates, known as the father of medicine.

Classical herbal medicine is a holistic approach to healing disease, treating the whole body to bring it into balance and harmony.

Dioscorides, the Greek physician to the Roman armies about the time of Nero, wrote the first Materia Medica in the 1st century AD which was to remain the major reference for the next 1500 years.  It is likely he learnt some of his medicine in Arabic and Indian countries during his travels.

“The Anicia Codex is now preserved in the Austrian National Library at Vienna, and translations have appeared down the centuries, the most recent from Spain in 1970.”

As the Roman empire flourished so did more famous physicians, foremost among them being Galen who formalised herbal medicine into a rational system.

From the time the Galenists opposed the introduction of chemical methods of treatment, medicine took two divergent paths.

Paracelsus fortified plant extracts with the use of homeopathic doses of elements such as zinc and recognised the essential importance of minerals in health.

After the fall of the Roman empire the world descended into the medieval dark ages, but the knowledge of herbal medicine survived despite the torture and killings of heretics, some of them herbalists.

The Pharmacopoeias of yesterday comprised plants used medicinally for tens of centuries and it was not until the1949 revision of the British Pharmacopoeia that many of these were removed to be replaced by synthetic formulations.

The manipulation of western medicine by the global pharmaceutical drug industry had arrived.

It is a different story however in the Chinese and Ayurvedic Indian Herbal Pharmacopoeia which have been in continual use for thousands of years.  Today they co-exist side by side with  allopathic medicine.

Today’s older generations will remember the 1950’s and 60’s when the family doctor’s personalised prescription was made up by the chemist using the same plant extracts that herbalists use today.  They will also remember receiving folk medicine from their grandmothers to patch up childhood injuries or set all manner of everyday ailments on the path to healing.

Sadly now all allopathic medicines are chemical man made drugs, some of which are patented plant compounds.  The only plants which have retained their place in allopathic pharmacopoeias are the poisonous ones, none of which are used by herbalists today, such as Aconite, Digitalis, Belladonna, Henbane and the Opium Poppy.

Today modern medicine denies the fact that pharmacy and herbal medicine used to be almost the same discipline. Somewhere along the line the word science was hijacked by the  pharmaceutical industry.  Their version supposes that unless a substance gives predictable and controllable results in double blind placebo trials, it cannot have validity. When the results of many of these trials are released into the public domain many years afterwards, it is often found that the results have been manipulated to suit the marketing purposes of the companies. This shows that they don’t even give credence to their own methods!

The word  science simply means “to know” from the Latin scire. Empirical knowledge, the foundation of medicine, is scoffed at by today’s  “scientists”.

The findings of pharmacognosy so far only serve to substantiate the claims made for the use of these herbs down the centuries, that using them in the time honoured empirical way will produce the results claimed.  It seems nature has had a win here – quite obviously a part of a plant cannot have the same chemistry or effectiveness as the whole plant.

Side effects so common in drug therapy can largely be avoided by using extracts of whole plants. Consider also the fact that many plants contain constituents as yet unidentified.

Nevertheless many drug companies are working to identify the so called “active ingredients” of plants so they can be extracted and patented in order to create new drugs and earn exclusive rights to market them. The ethics of allowing patents over substances occurring in nature, including genes, is so questionable it beggars belief..

“Its difficult to patent a natural phytochemical, because Mother Nature already holds the patent on it. And you can’t make much of a profit unless you hold the patent. By modifying, for better or worse, a natural compound, you can obtain a patent much more easily. The industry’s driving force, in other words, it not so much human health and well being as it is corporate patentability and profitability.” (Dr James Duke)

This situation is mirrored in veterinary medicine, as many of the global giants manufacture drugs for both.

The history of veterinary medicine is as inextricably entwined with that of human medicine, as is the historical relationship between man and horse.

Before the domestication of the horse some 6,000 years ago, they were hunted for meat. Today’s equines are used for work, sport,  recreation and meat, but through their history with man they have been faithful partners in transport, agriculture and warfare.

Horses harnessed to chariots appear in cave paintings from the time of Bronze Age man in the Sahara. Dynamic artworks of horses in all forms have been a feature of civilisations ever since – Egyptian, Persian, Assyrian, Etruscan, Chinese, Viking, Arab, Celt, Mongol, Turkish, Conquistador, Germanic and Anglo-Saxon tribes and the American Indians.

Written instructions on the maintenance, care and feeding of cavalry horses have been found scratched on clay tablets dating from the time of the Assyrians. According to Homer, the Greek charioteers fed Parsley leaves to their horses to increase their stamina and energy. They also fed Fenugreek hay as a conditioner.

In 1952 the first veterinary herbal was published, “The Complete Herbal Handbook for Farm and Stable” written by Juliette de Bairacli Levy, (1912 -2009) which was to inspire animal owners and herbalists the world over and make herbal medicine for horses and other domestic animals universally popular in this age.

In her introduction Juliette wrote “It was necessary to write this book in order to help keep alive the ancient and valuable art of the herbalist in veterinary medicine.”  Like Paracelsus, she forsook university and lived with gypsy and peasant herbalists all over the world.  “Grateful I am to my herbal teachers, they taught me far more than I ever learnt during nearly four years of scientific study at two universities.”

It is impractical to put all Juliette’s raw plant methods of treatment into practice, so we modern herbalists use of herbal extracts to provide medicine and dried herb mixes to provide preventive nutrition for horses today.

Excerpt from The Complete Horse Herbal authored by Victoria Ferguson