Leith Ryan – Speaking the Language of Horses – Without Whispering 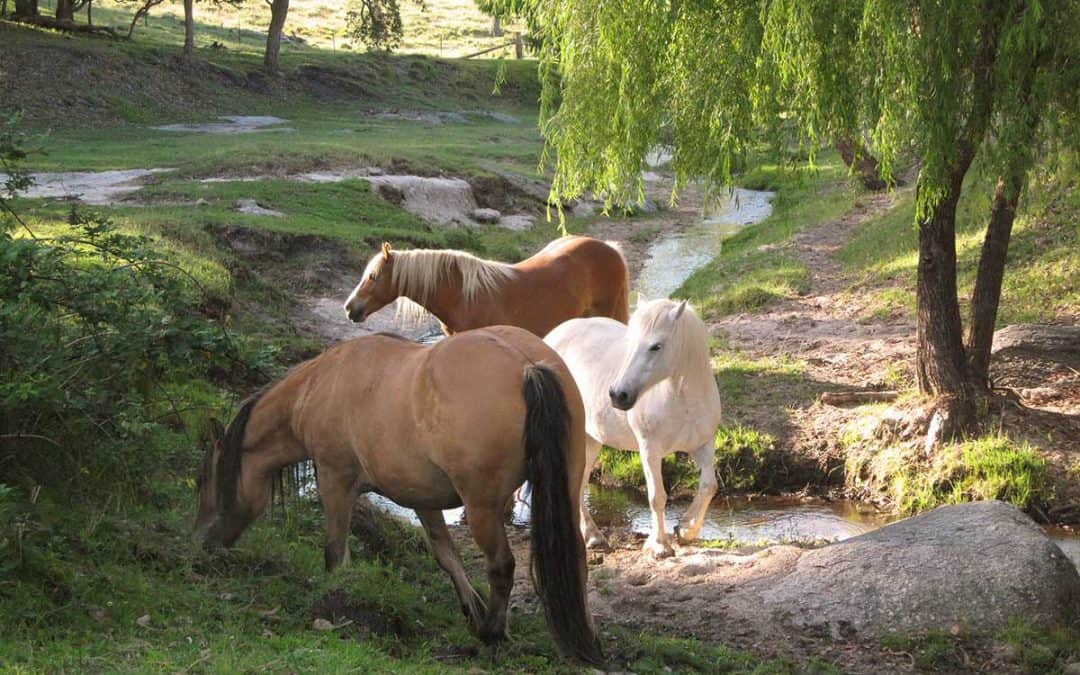 I have been puzzled for some time by the increasing number of horses being diagnosed with periodontal disease and the number of mature age horses having loose teeth or the need to have teeth removed. That is horses which are past the age of losing teeth but are a long way off their teeth having grown down to nothing.

Horses as a species should not and do not get periodontal disease. So why is this happening? Is it yet another modern degenerative western disease of man that their animals are now getting as well? If so why?

I was fortunate to find out the answer to this vexing question and a lot more wisdom from a fascinating man – Leith Ryan.

Leith is an Aussie who cut his teeth in equine dentistry around the backblocks of NSW, and for the last 15 years has spent much of his time in Europe, where he is in demand for his skill, including from elite establishments such as the Spanish Riding School as well as international dressage and jumping stables.

According to “Veterinary Notes for Horse Owners” dental disease is relatively uncommon. Given this bible has been around since 1877 and the most recent edition was published in 2002, we ought to take note.

Periodontal disease IS a modern disease caused by poor feeding and dental practices.

Leith Ryan states “Periodontal disease has been a very big problem in Europe since about 1996. It’s all about lack of horse management. Horses are being fed fermented hay (silage & haylage) which are designed for ruminants. The result is high acidity which causes a build up of tartar on the teeth which then causes gingivitis, gum recession, the alveolar fibres become infected, bacteria are ingested, and the result is periodontal disease, and the teeth become loose because the alveolar is diseased.”

(The part of the jaw containing the teeth is called the alveolar process, it contains all the teeth sockets and is covered with a soft tissue called gum. The jaw bones consist of a dense outer layer called compact bone and softer interior called spongy bone, the tooth is attached to it socket in the jaw by a soft fibrous tissue called the periodontal ligament which acts as a kind of shock absorber.)

“In addition there are gastro-intestinal problems, ulcers, even kidney and liver failure. The symptoms are then treated with drugs by the vets with no consideration for the causes, so there is no cure” Ryan adds.

It does seem incredible that horse owners, managers and vets think it is OK to feed fermented hay to horses, when we have all been taught forever that this is wrong. In Europe there is a political reason behind the practice. Leith again “EU farmers are subsidised not to have cows, so they turn the barns into livery stalls and indoor riding arenas, still make fermented hay which they used to feed their cattle and give it to the horses instead, so financially they are getting a double dip, while the horses are suffering.”

But why are people in Australia feeding silage & haylage to horses? I recall a situation some years ago when I leased out some stables to a bloke who had just come back from Europe, and he was feeding this stinking, sugary silage to his horses and I was very concerned they would all come down with colic. Little did I know then what the effects actually are.

Feeding fermented hay to horses in this country comes under the heading of FAD FEEDING, there is no need for it, it is complete nonsense. However Leith points out that processed feeds, especially pellets and cubes high in sugar, are another culprit, because of the sugar and because none of these feeds require proper chewing.

Leith explains “The horses’ mouth is a dynamic phenomenon, the mandible engages in a motion which moves up and down as well as from side to side, these two movements combine as a rotating, grinding motion. Combine this with the fact that the teeth are forever growing (erupting) and wearing, resulting in wear patterns which cause riding and nutritional problems. The most common and recurring problem with the growth pattern is caused by the fact that the upper teeth are wider than the moving lower mandibular teeth, allowing sharp points to form on molar edges. When pressure through bitting and/or tight nosebands is applied, the cheek is pushed into these sharp points causing painful bruising and lacerations. These sharp points should be routinely adjusted as part of regular equine dental maintenance, by a certified professional equine dentist.

Poor dentistry is the other factor in this depressing scenario. “We have jumped too far” Leith observes. “The fact is hardly anyone these days can do a simple, basic hand float and balance, which most of the time is all that is needed on a regular basis.”

Leith is deeply concerned about the future of horse dentistry from the point of view of the horse, because of the new “fashion” where vets and dentists blast away with power tools on sedated horses teeth until they feel like glass, do not occlude, are over floated, and the pulp is cooked from the overheating. Tooth structure is made up of three substances of different hardness, so they can wear at suitable levels on soft and hard food, Leith comments “This plan was no accident but it doesn’t work if horses are only fed soft food.”

It can take up to two years for abscesses to be noticed after one of these barbaric treatments. Old horses teeth are short and brittle and can shatter from this and young horses have the pulp open”, states Leith. “Pulp chambers are close to the surface in young horses and retract during the eruption process.”

So in Australia this is one of the reasons why horses are losing teeth, and also why some horses experience ongoing chewing difficulty, gastro-intestinal problems, weight loss and colic after an unfortunate encounter of this kind. Incorrect feeding is the other cause.

Any scepticism about this viewpoint should be removed by considering the dentition of brumbies and other wild horses. Leith has examined skulls of brumbies from the outback plains and the mountains, and found the teeth to be in much better order and balance than the domesticated horse. “There were some cases of broken teeth, some missing and some comparatively minor malocclusions, but we never found one with long angled incisors because they were using them in balance with the molars as per ‘the great plan’ and had no interference from man,” Leith explains.

Leith’s group The World Wide Association of Equine Dentistry also carried out some study projects with Mustangs running free on the Navaho reservations in New Mexico (USA) and in Tibet where similar results were observed.

Recently Leith saw quite a few brumbies from the coastal area of south east Queensland and all had advanced demineralisation of the infundibulum. He explains “Cementum falls away from the middle of the tooth at the end of the wear pattern of this cup like structure which normally provides the occlusal surface with additional enamel. Technically this is a carie (decay) but does not affect the pulp and can be controlled by treatments from a trained equine dentist.”

“This decalcification process naturally occurs first in the upper #9 molars at 18 years of age, then in the #10’s at 23 years finally the #11’s (last molars) at age 28. The coastal brumbies were aged between 9 to 15 years but nearly all molars were in an advanced state of demineralisation. This was attributed to the introduced grasses such as buffel, kikuyu and sertaria which deplete the phosphorous and calcium and cause nutritional secondary hyperparathyroidism commonly known as Bighead.“Leith concludes “We horse people have created the problems and we should recognise and compensate for them”.

When it comes to bits, Leith also tells it the way it is. In his view “Horses have put up with pressure and pain from bits for 6,000 years.” Until now that is, he is the inventor of the Hippus bit, which has been developed according to his maxim “If the horse is comfortable and calm, is free from pain and stress, then he is content and therefore easier to ride and train”.

Leith embarked on his Hippus bit project around 1980 and his involvement and experience in equine dentistry has played a very important role in the development of his bits. Since starting his career as an equine dentist in 1975, he has found and investigated many problems in horses’ mouths caused by badly designed bits produced without consideration for the horse and without elementary knowledge of anatomy, physics and biomechanics. The anatomical form of the Hippus bits frees the horse from constant pressure on the tongue, bars and palate. The material, medical grade stainless steel, is guaranteed to be acid resistant, free of oxides, toxins, allergens and magnetics. For further information www.hippus.ch

As a Master of Equine Dentistry and a horseman with many years of experience, Leith has seen many injuries caused by traditionally designed bits, to palate, bars, jaw, tongue and cheeks and the hyoid apparatus.

Most riders and trainers are unaware of the significance of the hyoid apparatus to the comfort, health and performance of the horse. It is a bone structure which is extremely important and very fragile. It provides support and alignment for the tongue and the larynx and is very easily damaged. This damage is frequently caused by bits, tongue ties, tight nosebands, poor dentistry and bad riding. The latter category includes dressage horses being ridden way behind the vertical with the neck rolled up so much the horse can barely breathe, and jumping and polo horses ridden roughly with so much opposing gear on their heads and necks, it defies belief.

The complexity of the hyoid apparatus and how even minor damage to it adversely affects horses to the extent they can lose their balance and are put down, will be the subject of a further article.