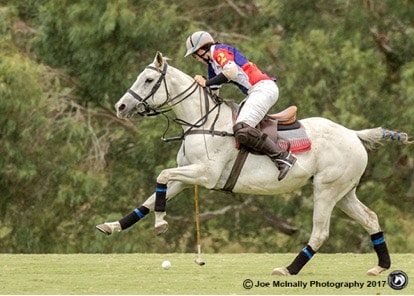 Maddie Shoesmith from Strathalbyn, SA, and her team of 5 polo ponies are just heading home after spending a month playing polo in the Hunter Valley and Hawkesbury regions of NSW.

“It’s been a huge trip for the 5 ponies as well as me and our South Australian Ladies Team,” says Maddie, “And I couldn’t be happier with how my ponies have performed.”

Maddie has prepared all the ponies, a mixture of Thoroughbreds and Stock Horses, on a VF Natural Diet and herbal remedy program, since late 2016 and this is their first season on the full VF Natural Diet.

Their first tournament was the State of Origin at Ellerston for Ladies Teams, and then they continued on to Windsor Polo Club in Richmond NSW, where they played mixed 4 goal matches.

“I am very happy with the results from the VF Natural Diet, the ponies travel really well, their appetites are brilliant and there has been no tying-up. “

As always with travelling horses, the trip was not without its bumps, the first day Maddie and the horses arrived in NSW one of the horses cast herself in her yard. Another was kicked in both hocks later in the week, but Maddie has found consistently that the horses “bounce back really quickly from any issues because their immune systems are in such good order, and both horses were back and ready to play the next game of polo.”

“They are really fit and recover very quickly after each chukka. Usually after being in for 6 months they would be sour and over the whole thing, but they are still rearing to go.”

Throughout the trip, the ponies changed accommodation 4 times, which involved changes in water from town water to dam water and lots in between. Similarly, temperatures in the summer in SA are usually fairly warm to very hot, and very dry. In the Hunter Valley and Hawkesbury regions of NSW the climate is more humid, and a lot more variable. Maddie reports that the ponies had to go through one day of 34 degrees and over 80% humidity, to the next day being 16 degrees and raining, and the change really didn’t affect them at all!

“I myself forget that when you travel there are so many things that will change for the horses, including temperature, feed quality, pasture, water, size of paddocks and fencing. The horses took everything in their stride and I didn’t notice any change in them throughout the trip, they just keep working hard and playing well.”

Maddie and her Dad, Richard, also played in Victoria earlier this year where Maddie won Champion Pony with Mercedes at the Mingela Ladies Tournament.

In SA, they play mixed tournaments as there is only one Ladies Team in SA, comprising Maddie, her two cousins Chloe and Whitney and a West Australian, Joolz, co-opted to make up the team.

Victoria points out “One of my main goals with my clients is to give them the tools to deal with common problems and emergencies.” This has worked brilliantly with Maddie as with 20 horses in the stable, including a couple of dressage horses and eventers, there are usually one or two horses that need attention.

“Maddie has my emergency response kit with things like homeopathic Arnica, Devil’s Claw, Aloe-Witch, Artisan Skin Balm, Pro-Biotics and Aloe Vera Juice, and they get plenty of use.”

Maddie concludes “I am in a much better position now to deal with things myself, and not panicking, and the vet bills are less. I really like being able to deal with issues, such as their temperament or fussy eating, rather than putting in down to just the way a horse is, and I quite often get Victoria to make up special herbal mixes for individual horses. I now know a lot more about my horses, and am in a much better position to deal with the little things as they come up before they escalate in big things.”