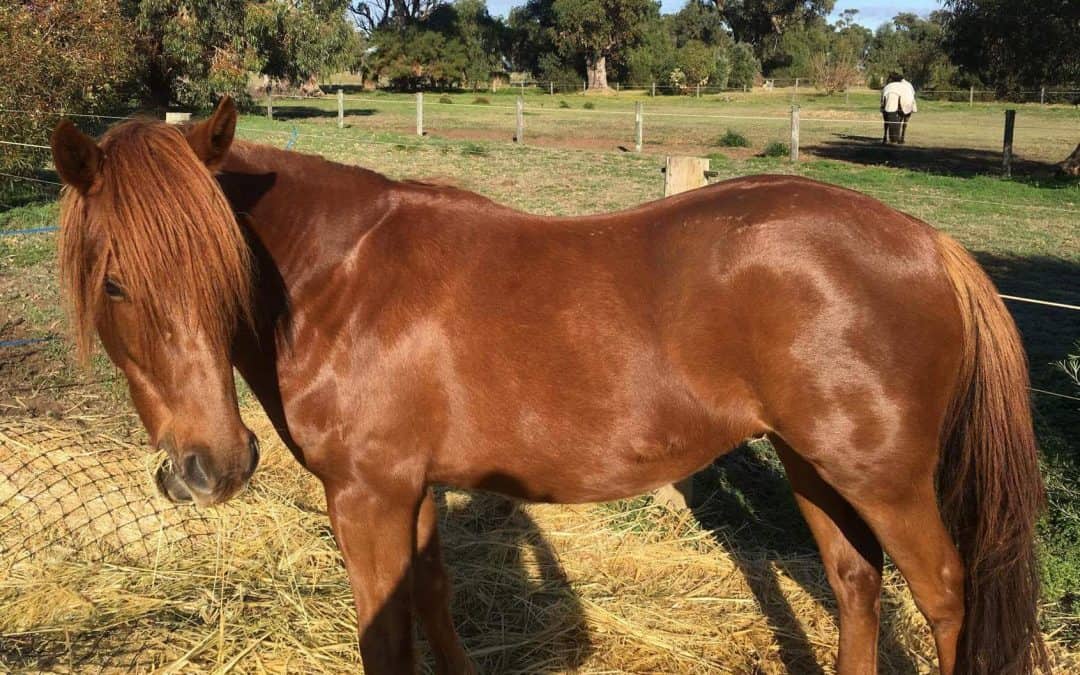 In 2015 my husband and I rescued a little brumby who had been horribly neglected. We named him Charlie.

I understood that he might have “walk about” weed poisoning and it could be fatal if not corrected as soon as possible. In most prolonged cases of exposure it is fatal, which was the fate of his mother and his herd.

The first time I saw him I thought he was only 5 months old, due to his size. His body condition was emaciated, his coat was long and shaggy, dull, matted. He had hardly any energy at all, and his legs were bent at the knee due to his malnutrition. He had severe rain scald or a fungal infection on his back.  His mane was knotted into dreadlocks. His feet had bulbous rings on them from stress and malnutrition. 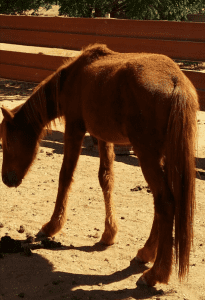 Charlie was in a terrible state when he was first rescued

He had only been handled by humans a few times, which involved  dragging him up a horse float to get him to where he was when we found him. We had to walk him 10km to our horse club, as we couldn’t get him on the horse truck and I didn’t want to do it roughly. We decided to walk him there, going slow, and resting when he needed it.

Straight away I noticed his intelligence, giving to pressure from the halter.  Needless to say after 10km he led very well.

It was touch and go if he was even going to make the journey, but I think he knew a better life was waiting for him.

We starting him out only on shedded hay, and fresh cool water so as not to shock his body. As a week or two went by we began to increase his feed to help him gain weight, but introducing new food as slow as possible.

As he became well we started educating him so he was safe to handle.

Once he was safe to handle we got our vet to take bloods so see what was happening with his liver, as he wasn’t really progressing how I would have liked.

Blood tests revealed he still had active liver cells dying off, which meant the damage was severe, or he was still accessing a poison source. But we did not see how this could be.

The vet also said he was more likely to be about 15 months old, not 5 months, so this showed how stunted his growth was.

As time went on, he started to gain weight slowly, have energy, and progress in his training.  He was looking great for a while there.

Charlie gained weight slowly, had energy, and progressed in his training

As true Pilbara summer hit us, he started to get worse. He went backwards with his condition. We took some advice and put him on a weight gainer pellet and some other ‘fast foods’ and unfortunately strayed from his natural diet in an attempt to see faster results of weight gain. He was constantly scouring.  But the more food we added the sicker he got.  I would take him back to just hay and he would improve slightly. One day we caught him eating a weed in our paddock. It’s been there forever, none of the other horses ever touched it, but Charlie probably relied upon this as a food source in the desert and was reverting back to old habits despite now having enough food.

That’s when we called Victoria Ferguson, who identified the weed as Russian Thistle, a healing plant when small and young, but poisonous when large and fully grown. We removed all the plants from the paddock. We did a full VF Consultation for Charlie with Victoria and she put us back on the right path.

No more commercial pellets or processed feeds, as these were placing more stress on his already fragile digestive system.  Charlie went back onto an all-natural diet which balanced his mineral and essential nutrient intake, and Victoria prescribed herbs to detoxify his liver, heal his gut ulceration, and generally rejuvenate him.

Charlie was still ingesting sand and being in the desert we could not remove the sand. We sent Charlie to Perth to be agisted on a friend’s property.

It’s been a slow process but he has improved immensely. He has grown over 2.5 hands and his body condition and muscle tone is really superb and he is sound. His intelligence is amazing, he is wonderfully kind and deserves life.

As we have now moved down to Perth, we will be bringing him home soon, once our fences are up, and I can’t wait to finish breaking him in.

I had doubts about Charlie’s long term soundness as the ligaments in his legs were too loose and he was always down on his pasterns.  He has now strengthened up well and he is sound.

Lauren is a student in the School of Equine Herbal Medicine as well as as a mother and a Police Officer, she will be an awesome practitioner one day.