Back in March this year we introduced you to Jodi Homer’s Percheron X mare “Ballista”.

Her story is a fine example of how professionally prescribed herbal treatment can help horses heal naturally. The lameness in her infected hock was quite extreme and Jodi was not happy with the vet treatment or the cost!

To get up to speed, read Ballista, another Odyssey from our March Blog if you missed it back then.

We thought we would check back in and see how Jodi and Ballista are going.

Ballista has been on the mend I’d say since her herbal treatment finished 12 months ago. At the time we wrote the article in March, she still had a noticeably larger hock where the infection was, and all agreed that it would possibly take time to reduce. 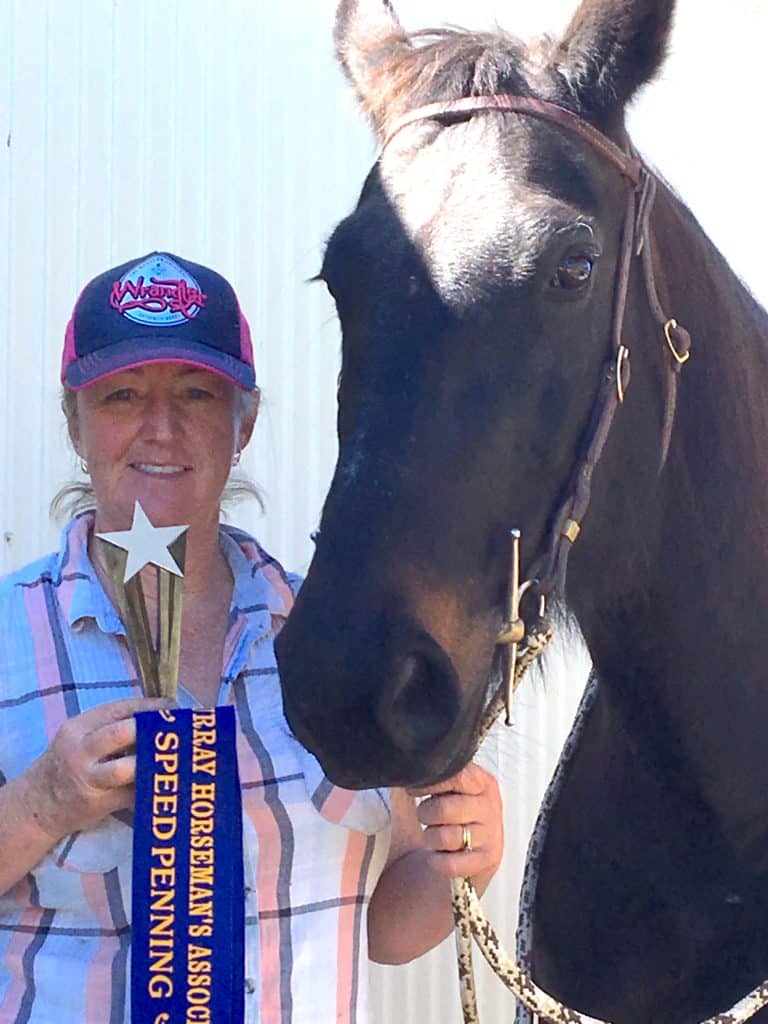 Now 12 months on I would say it is barely noticeable which is comforting.

Ballista is now my 2nd horse, due to my main man Junior being back in full work. Another Victoria Ferguson Equine Herbalist success story that was blogged earlier in the year also, you can catch up on that one here. Victoria has also asked for an update on Junior, which I will get to shortly, but for now Ballista.

She is not a scopey mare, always had a very average canter, not really a jumper and the canter prevented her from really being a dressage mount, but the cattle thing had been a dream of mine for a lifetime.

So really since her recovery I’ve found she is a horse I can literally give a couple of weeks work to, and off we go to a Team Penning weekend, and we can have a lot of relaxed fun chasing cows. I absolutely love it, and have now done two team penning days.

I recently entered the Upper Murray Horsemen’s Arena Sorting and Speed Penning day, the latter I thought would be pretty funny as Ballista is not fast at all, and as it was an individual thing, didn’t really think I’d have a lot of hope against 70 or 80 of the regions best.

I was wrong… we did pretty well at the arena sorting, and after considering not turning up on the second day, we did indeed pen all three of our beasts in the speed penning, in fairly decent times (25 seconds, 40 seconds and 25 seconds), not the fastest times but obviously most consistent.

Again not realising just how well we had done, I went home only to read on Facebook the next day that Ballista and I had won the Speed Penning overall aggregate (best time for the three runs).

This was beyond my wildest dreams.

Thank you Victoria, you have given me both my horses back. I’m so happy we got them right, and I think if I’d not found you then none of this would have happened.

My advice for those with horse issues, get in touch with Victoria. She is a wealth of knowledge, and if you need a vet she will tell you. If she thinks she can cure your horse with her magic herbal remedies, she will also tell you.

Don’t settle for anything less.

From Victoria – I am sure all horse owners can identify with the anguish we feel when our precious horses are not healthy, happy and sound, so for me to know how happy Jodi, Junior and Ballista are now is a tremendous reward. Thank you Jodi for your great words. The other good thing that came out of this is that Jodi became my social media manager.