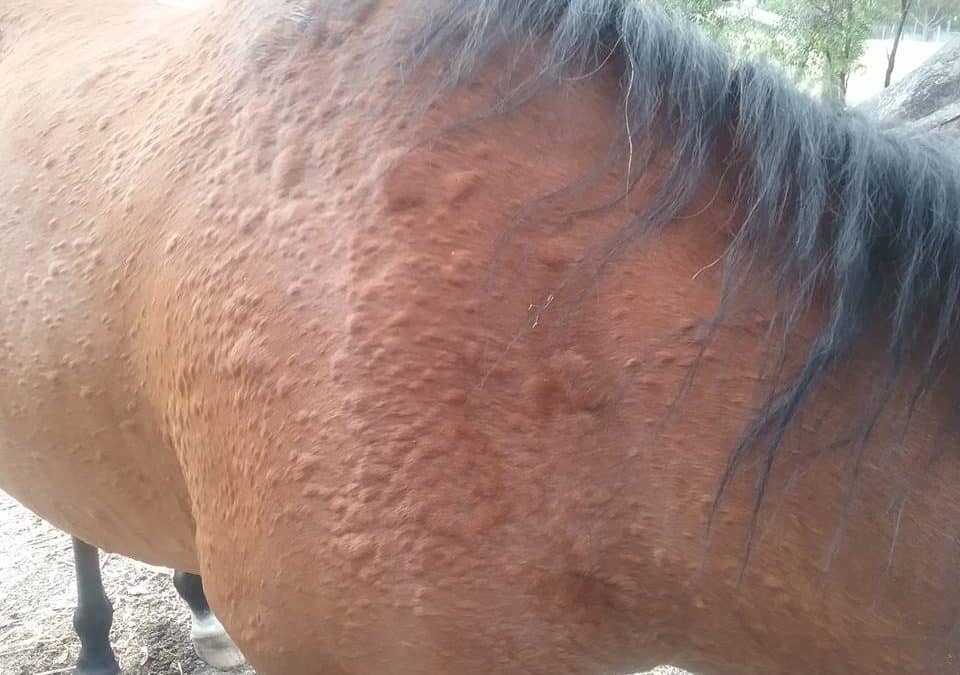 Heatwaves, drenching storms, masses of insects – this year’s extreme summer conditions are creating quite a few problems for horses.

Skin reactions such as hives and viral attacks are quite common. Here are a few horses I’ve treated this season.

While I was on holiday, one of my clients from Stanthorpe, Qld, contacted me for urgent help with her warmblood gelding, who overnight became covered in hives (pictured above).

Fortunately, he didn’t have any other allergic symptoms such as itchiness, difficulty breathing, high temperature or swellings.

I was able to get my client to make up a bucket of wash using Chamomile flowers, which she then strained and used as a rinse after hosing him all over first.

She also syringed 20 ml of the Chamomile tea with Rescue Remedy drops added into his mouth several times in the day.

She reported back that after 48 hours there was no sign of any hives.

It’s certainly worth having Chamomile flowers on hand for use as an emergency response, as they have many healing properties, including anti-allergy. They’re also very useful for relieving mild colic.

Debbie was pleased she was able to save a vet bill too! 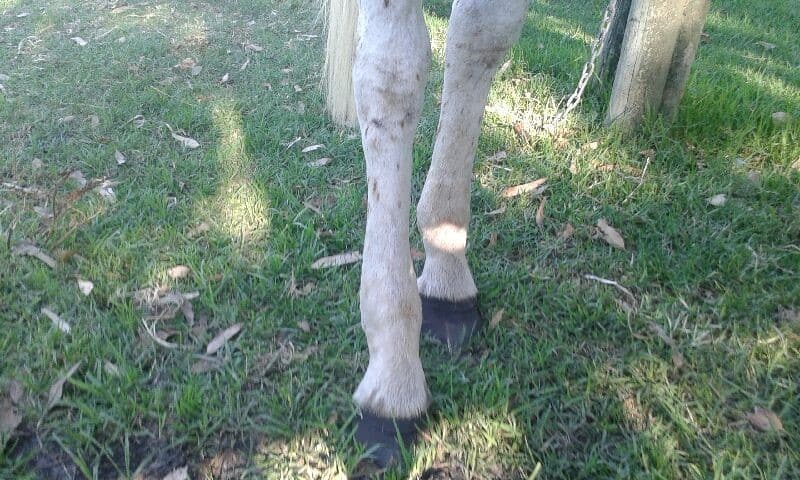 As soon as I got back from holidays, another client, this time from Melbourne, contacted me for help with her daughter’s Appaloosa mare.

All four legs on the mare were swollen, she was off her feed, showing colic symptoms, she had a temperature and she also had hives.

Swelling in the lower legs always means the horse is under viral attack as the lymphatic system is working overtime in tandem with the immune system to destroy the invaders. As lymph fluid is pumped around the body by the contraction of muscles, it quickly pools in the extremities in these situations. It can also be seen under the belly and between the front legs in more severe cases.

The mare needed veterinary attention to get a quick result, and my client followed up with natural treatments and some good management, including syringing cold pressed linseed (aka flax oil) several times a day as a laxative, cold hosing of the legs and hand walking to reduce the leg fillings, and she also used the Chamomile wash on the mare’s hives.

I had previously treated this horse for immune problems, and it was decided to treat her with anti-viral and lymphatic stimulation herbs to help her back to full health again.

Yet another holiday casualty was a young German riding pony colt who had no health problems until hit by a virus.

He was caught in a massive rain downpour one night and the next morning he was found with swollen legs, massive lumps as big as your hand on the upper hind legs, a temperature of 39.1C and his whole white nose encrusted in burn-like scabs.

He received veterinary attention, but he was also given Chamomile tea with Rescue Remedy, as well as Rosehips Tea, and followed up with a brew made from Lemon, Honey, fresh Garlic and fresh Ginger. Raw Ginger is a potent anti-viral to add to the anti-bacterial qualities of raw Garlic, Lemon and Honey.

My Artisan Skin Balm was used on his scabby nose as well as some lesions which came up later on his white socks, and this cleared them up in a day or so.

All three of these horses were already on their own customised VF Natural Diets, which gave them a head start.

My diets are designed to provide preventive nutrition, that is to keep the immune system in the best order so that when illness or injury strikes, the horse is able to recover much more quickly than they would if their immune system was already below par.

How about your horse, has he/she suffered in the extreme summer weather this year?