Up until quite recently the bad habits which some horses acquire of weaving, wind sucking and/or crib biting were termed “stable vices”. However recent research has uncovered quite a different understanding of these behavioural problems.

And unfortunately for the horse these problems have been raised to significant levels by the inappropriate way in which they are kept my man.

Stephen Budiansky in his amazing book “The Nature of Horses “  provides some excellent insights into abnormal behaviour and evolution. He estimates about 15% of domestic horses exhibit these annoying habits which involve repeated, stereotypic rituals.  These of course include weaving, wind sucking and crib biting, but he also includes pacing, drinking abnormally huge amounts of water and repeated biting at the flanks or legs.

Budiansky states that these bad habits form such a consistent pattern that they appear to arise from some basic mechanism present in all horses and this in turn implies that there must be an evolutionary story at the heart of it.

“The striking thing about all stall vices in horses is that they are exaggerated forms of some of the horse’s most basic, instinctive, and presumably hard-wired motor patterns – eating, moving, grooming”, he states.

Budiansky then compares these with similar human disorders associated with abnormally high activation of certain pathways used by the brain to send nerve signals out to the body.   These pathways involve the neuro-transmitter dopamine that activates certain nerve cells.  Experiments in which humans and other animals are given large amounts of stimulant drugs such as amphetamines, and narcotics such as morphine, produce the same sorts of repeated, stereotyped behaviours.

For example a monkey repeatedly scratching and picking at itself, a cat moving incessantly looking from side to side and sniffing while humans engage in repetitive and compulsive acts of sorting objects (females often emptying and rearranging the contents of their handbags over and over!).

So excessive stimulation of the dopamine pathway in different species triggers activities that are in a sense characteristics of the fundamental behaviours of each.  Budiansky quotes results from researcher Nicholas Dodman who conducted an experiment to test his hypothesis that the stereotypic behaviour was actually triggered by the natural opium like compounds, endorphins and enkephalins, that the body itself produces especially in response to stressful stimuli.    “… seven crib-biting horses were given injections of chemicals known to block the effect of narcotic; in all seven cases the frequency of crib-biting dropped from several times a minute (and from a high of 15 a minute) to zero within 20 minutes.  In some cases the effect of a single injection lasted for days.”

Budiansky summarises that the body’s natural ability to release endorphins in response to stress, and the ability of these natural opioids to stimulate the dopamine pathway, makes adaptive sense, and a natural feedback mechanism helps to keep the whole system in balance. Eating, walking, grooming, and other basic activities appear to act on the so-called pleasure centre of the brain, which in effect “rewards” these important activities with a release of endorphins.

So this explains why horses stabled or kept in small yards most of the time and especially those concurrently fed high proportions of concentrated feeds and insufficient roughage, are at a very high risk of becoming weavers, wind suckers, crib biters, pacers, or worse still self mutilaters.  Those that don’t develop these habits will more than likely develop ulcers instead. Chronic wind suckers and crib biters can wear down their incisor teeth very badly with obvious ensuing problems.

Therefore the way to prevent these bad habits, which can be termed that because they are so bad for the wellbeing of the horses concerned, is a combination of providing a more sociable, less confined environment and natural nutrition.

Dr Paul McGreevy’s book “Equine Behaviour, A Guide for Veterinarians and Equine Scientists” outlines studies of the behaviour of stabled horses carried out by himself and Professor Christine Nichol of Bristol University which they started in 1992.

They dispel two myths about wind sucking.  Firstly that wind sucking is NOT a learnt response, but is triggered mainly by inappropriate management. That is the complete management – diet, exercise and environment.

Secondly that horses do not swallow air when wind sucking. Combined endoscopic and fluoroscopic observations have shown that although a column of air does suddenly appear in the proximal oesophagus during wind sucking, this is expelled through the cranial oesophageal sphincter into the pharynx as the grunt is heard and that very few air boluses are passed towards the stomach.

Therefore it is clear that the use of windsucking collars is extremely questionable.

McGreevy also cites other deleterious factors in management which will contribute to these behaviours – inadequate shelter so they are always exposed to the elements, increased frustration and/or pain, use of pain killers (opioid based drugs) and feeding sweet or highly palatable feeds.

His research also showed that there is a genetic predisposition in some horses to develop these behaviours which is due to raised levels of endorphins.

Whilst it is not possible to stop horses from weaving, wind sucking or crib biting, overnight,  it is possible to significantly reduce the incidence of these behaviours.

I have treated many horses with these problems with good results.  The VF Natural Diet, combined with my holistic herbal treatments especially for the nervous and digestive systems, and appropriate management and socialisation, works wonders. 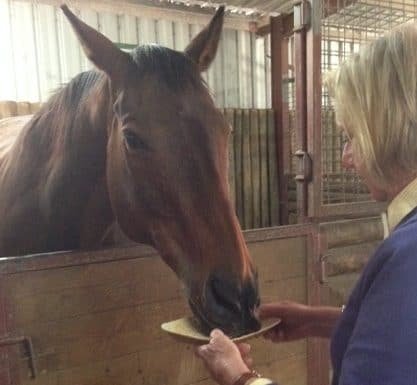 The nervine herbs which reduce motor neuron response and promote restful sleep in humans and those which raise the natural serotonin levels in the body have a role to play in treating these horses. Obviously, these require prescribing by a trained practitioner who is experienced with horses and who is available to assess response with the owner or trainer.

Budiansky’s conclusion is most appropriate. “A mechanism evolved to deal with the occasional stress of life in the wild can easily backfire under the stresses of artificial confinement in an animal adapted to a very different environment. The ability of most horses to tolerate what humans dish out to them is all the more remarkable testimony to their adaptability and learning ability.”